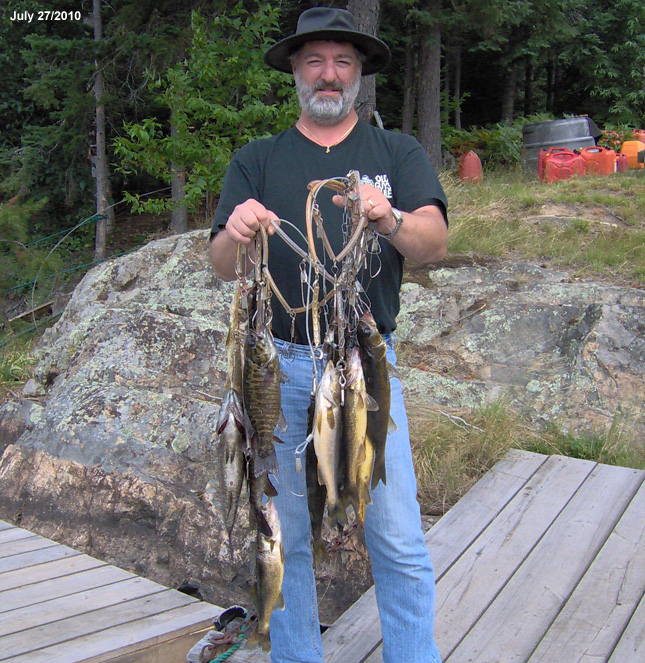 Just imagine walking around a bush and seeing a Bull Moose's breath streaming into the cool autumn air as you quietly take aim or hear your heart pounding when the biggest Black Bear you have ever seen walks towards your tree stand. This is just part of the excitement our guests experience year after year, which is why they keep coming back.

Hunting:
The vast wilderness to the north is the perfect habitat to grow big Black Bear and Moose, which is why our hunting packages are so popular.

Accommodations:
We offer three remote boat-to outpost camps located in the far northern region of Lake Onaping where you will find the very best fishing for Walleye, Smallmouth Bass, Perch and Northern Pike.

Please explore our web site or feel free to contact us with any questions. Fishing Report is below. 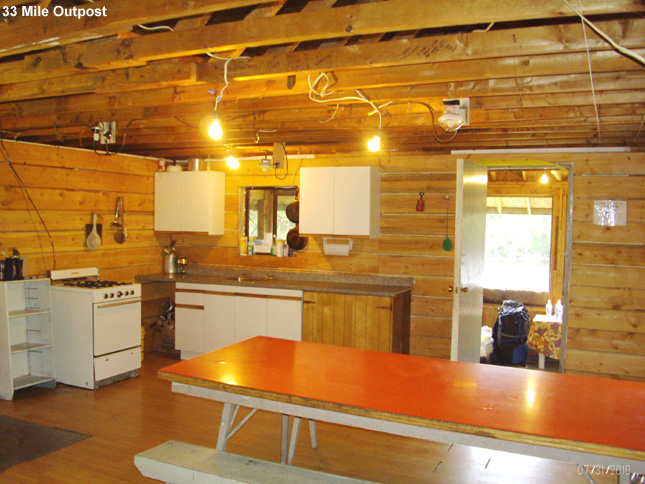 From July 22-29 we stayed at 33-Mile Outpost camp. It was in the middle of the heat of summer. The weather was great for swimming as there was a small heat wave. Temperatures were in the 90s every day and there was little wind. I can't imagine worse fishing conditions. We still managed to catch 235 Walleye and 247 Smallmouth Bass. We did not keep count of Northern Pike but we were not targeting them like the Walleyes and Smallmouth Bass so I figure around 50 to 70 Pike. We did not bring enough gas to drive back down to the middle of the lake for Lake Trout but driving through the middle of the lake you knew it was stuffed with Lake Trout. The water was sparkling clean and did not have the Walleye Wine water like the north end where the outpost camps are.

This was our very first time on the lake and we did not know any hot spots. We just trolled the shoreline with Thundersticks and Rapalas and when we found Walleye or Smallmouth Bass, we would stop and start sinking jigs with leeches or worms. The one day we did pack a lunch and took off into the area where 25 mile outpost is located. We talked to the guys at the other outpost and they were doing much better then us as it was their 4th year in a row fishing Onaping and they knew where to go. They were also using big minnows and catching bigger Walleyes and Pike than we were. For the week, our biggest walleye was 28 inches and fat. He was between 7 and 9 pounds. Biggest Smallmouth Bass was 19.5 inches and biggest Northern Pike was 34 inches. We did not target Pike or we would have caught more and probably caught something bigger.

The cabin was awesome and located in a nice spot. The boys really liked the giant fire-pit and being able to look out over the lake while having a fire. We also liked the big kitchen table, which was perfect for playing Texas Hold'em. The Walleye taste so good out of Lake Onaping. They cook up fluffy and white and were really sweet. We have caught Walleye on other lakes where their meat was semi-transparent and they tasted fishy like sardines. Lake Onaping's Walleyes are fantastic. We ate a few Smallmouth Bass as well and you could not tell the difference between the bass and the Walleyes.

When we coming back we will be focusing on Lake Trout and Northern Pike and brining the video cameras this time to get some video for Maureen.